​An Inn for All Seasons

Renovation of the Wedgwood House

Under the old porch floor, a secret underground stone room was revealed. A perfectly two-foot square Pennsylvania bluestone rock about four inches thick sat atop a wood hatch. Three of us had to lift the stone off the hatch door. We lowered an eight foot ladder

The Renovation in Pictures...

The new addition and minor renovations to select rooms in the original portion of the Inn will bring the building up to code for the Americans With Disabilities Act as well as the most strict fire safety guidelines. The main level of the addition will house a new kitchen and breakfast room/meeting facility. The second floor will be two or three new sleeping rooms. The old kitchen space will become our office -- our first real office space at the Inn! We will also have a real basement (with nine foot ceilings). We will also install a fire suppression system (That's' a sprinkler system in layman terms). The Pine Paneled Room (I), a small room with double bed on the first floor, will be lost and gone forever.

and climbed down...perhaps the first in 100 years to do so. It is a beautiful hand-chiseled stone chamber - about 7 feet high and 24 feet long. It also has an arched ceiling. We see a different stone in the far end of this chamber, on the end facing the Victorian gazebo -- about four-by-four in size...more on that later. 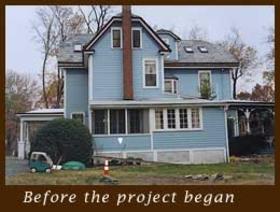 Inside, while removing the old Servants staircase, which led from the kitchen to the room above it, we revealed a second landing which created a hidden storage space. We always wondered why a 'slant' in the Wedgwood office/kitchen ceiling was up there...So, one could come down the Servants staircase, into the then back pantry and into this underground room. *Now the ghost stories begin to make sense...* It is common knowledge that the Wedgwood House was part of the Philadelphia-Quaker Underground Railroad. Organized in the early 1800's, a secret string of homes served as a safe-haven for blacks escaping the southern slave trade. The goal was to hide these people from bounty hunters who were legally permitted to look for "stolen and lost property" north of the Mason-Dixon Line. Hiding from house-to house by Quakers and other Abolitionists, the underground railroad tried to move former slaves north to Canada and freedom.

The 'scratching' sounds reported by guests is said to be that of a 12 year old girl named Sarah, who has been separated from her parents. The sounds come from that servants staircases' hidden room... The difference in the underground stone wall probably continues the next 10 feet to the hatch door in the Gazebo floor, just as the local legends say. From there, down the embankment to Aquetong Springs and the Delaware Canal and onto the next 'friendly' barge to Lumberville - the next stop on the Underground Railroad, 7 miles north of New Hope...

And that is only Week #1!!! We plan on preserving the underground room. If the structural engineer says its safe, we hope to incorporate the space in our House tours. Our local historical society will also connect us with an African-American Heritage group to assist by possibly linking our stop on the Underground Railroad with references in letters written by former slaves who escaped through our area........ 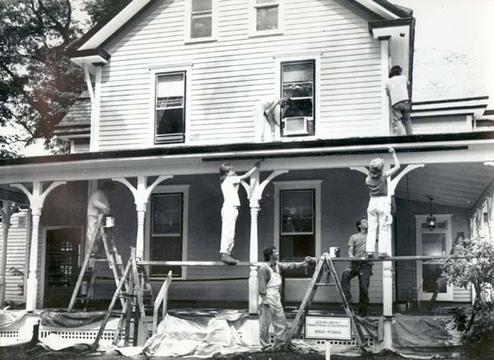 All work will be done Monday through Thursday to avoid disruption to our weekend houseguests. Midweek guests will be guided to either the Aaron Burr House or the Umpleby House. Of course we planned this construction to coincide with our slowest season to minimize guest inconvenience.

(01.11.99) Week One of the building project began with the demolition and removal of the one story 'lean-to' circa 1940 on the back of the Wedgwood House, which is circa 1870, but built on the ruins of a much older pre-Revolutionary War structure. Day 3 and two 30 yard dumpsters later, the crew began to excavate the new basement and discovered two interesting things outside plus one inside... 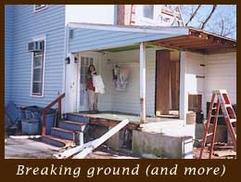 Once the "I" room was removed, the crawl space under the kitchen was exposed. As the earth was dug, we discovered that the foundation wall in that area was only two feet underground...so if we dug 12 feet under...the back of the building may collapse. The area was quickly shored-up and a concrete footing poured on Day 4. In snow, a steel enforced block wall was built six feet high and 20 feet across.

(01.04.99) We began a major renovation to the Wedgwood House today. The back one-story addition circa 1940 is being torn-down as I am writing to you, and will be replaced by a 2 1/2 story structure that is Victorian in style to match the original 1870 building. We project an early spring completion date. Check back at this site for weekly construction updates including color images.